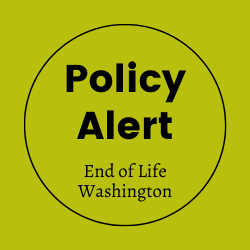 The medical community has made great progress in developing treatments to extend life. It has also created new fields of medicine devoted to treatments for the pain and suffering associated with debilitating or terminal diseases. End of Life Washington (EOLWA) recognizes the evolution of palliative care as an important contributor to the quality of life at its end. This is why we support efforts to legalize the use of psilocybin therapy for depression and anxiety experienced by terminally ill individuals.

Psilocybin is a psychoactive substance with mind-altering effects that is found in certain mushrooms, and it has been used for thousands of years to enhance spiritual experiences (https://en.wikipedia.org/wiki/Psilocybin). It acts on serotonin brain receptors, resulting in changes of perception, cognition, and emotion (https://www.heffter.org/#psilocybin). The U.S. government began to study it in the 1950s and 1960s to treat a variety of behavioral health problems, including addiction, PTSD, obsessive-compulsive disorder, treatment-resistant depression, and psychological/existential distress caused by cancer, as well as pain. These early studies were very promising but were not well controlled in light of current clinical research standards. Partly because of the political/cultural climate in the ‘60s and ‘70s and fears raised by recreational use of this and other psychedelic drugs such as LSD, hallucinogenic substances including psilocybin were placed on a “Schedule I” list of drugs under the Comprehensive Drug Abuse Prevention and Control Act of 1970. This made it illegal to possess, manufacture, or distribute them. However, government-supported, well-designed clinical trials resumed in the 1990s, including with people with a terminal cancer diagnosis who were suffering from existential/psychological distress. Some of the most notable studies have been conducted at Johns Hopkins University and New York University.

This review focuses on the use of psilocybin with terminally ill patients. Psilocybin therapy is of increasing interest to some palliative care specialists as a possible addition to the palliative care toolbox (Byock, 2018; Dyck, 2019). It is also of interest to some advocates for medical aid in dying who wish to improve and expand choices available to terminally ill patients to reduce suffering, enhance quality of life, and die on their own terms.

2. What do the studies show?

Several excellent articles are available that review these studies (see, e.g., Byock, 2018; Griffiths et al., 2016; Nichols et al., 2017; Ross, 2018). They also provide an explanation of the mechanism of psilocybin based on human brain imaging technologies that show how psychedelics temporarily affect brain connectivity networks. This alteration allows for greater cognitive flexibility and creates a temporary disruption of some of the negative and dysfunctional cognitive/emotional patterns people tend to get stuck in that are part of normal consciousness and in particular cause rumination, anxiety, and depressive thinking (“the default mode network” [Pollan, 2018]) and may explain why psilocybin seems to be effective for such a broad range of psychological symptoms.

Recent studies report several interesting and consistent findings. A terminal cancer diagnosis is well-known to produce anxiety and depression (including suicidal ideation) in a significant number of individuals, so most of the studies involving people with terminal illness have studied cancer-related psychiatric distress. First, psilocybin therapy, when properly administered under controlled, supervised, supportive conditions, produces no serious psychiatric or medical adverse events. (There may be some initial anxiety or nausea, but this subsides and has no lasting negative impact.) Second, in a very significant number of subjects it produces immediate meaningful and enduring reductions in psychiatric and existential distress, as well as improvements in quality of life, death acceptance, life meaning, optimism, and spiritual meaning, as measured by several valid and reliable standardized tests completed by the individual and also validated by people who know the individual well enough to observe effects. Third, two-thirds or more of subjects rated the experience as being one of the most personally meaningful or spiritually significant events in their lives.

Some studies involved several sessions of therapy, but a significant number used only one session with a single dose of psilocybin. Sessions are highly controlled to ensure that attention is paid to what are considered the three most important factors for a positive experience: substance (the drug is obtained from an approved manufacturer with standardized dosages), set (clear expectations, arrived at through preparation and information about the experience beforehand), and setting (safe, comfortable, and with trained guides). Preliminary screening for any contraindications related to medications, medical conditions, or serious psychiatric conditions is also essential. This is in great contrast with self-directed recreational use, which often involves a drug from an unknown source with uncertain dosage and no trained guide. In addition to following rigorous design models to ensure reliable and valid data, several protocols are now standard in studies of “psilocybin-assisted psychotherapy” with individuals with terminal illness:

A fascinating and informative book on this topic was written by Michael Pollan (2018), a  highly respected journalist on topics like food, nature, and science who is by no means a true believer. Pollan started out as a skeptic but researched the literature very thoroughly, which he presents in a clear and objective manner. He ended up having his own psychedelic experience and describes it.

Byock (2018) is a prominent palliative care expert who argues that in addition to alleviating physical distress, palliative care should also address the suffering caused by emotional, social, existential, and spiritual distress at the end of life. He supports psychedelic therapy and argues that it is a right-to-try issue.* Byock is a long-standing opponent of medical aid in dying, but he suggests that it might be possible to build consensus for reclassifying psilocybin from being an illegal Schedule 1 drug among typically disparate groups: conservatives, progressives, and both opponents and supporters of legalized medical aid in dying. His hope is that some terminally ill people interested in DWD (Death With Dignity) might decide not to pursue this option after receiving psilocybin therapy. This is debatable as DWD supporters argue that a desire for DWD is not the same as suicidality (which is caused by psychiatric symptomatology) but is based on existential and quality-of-life concerns related to terminal illness. Annual DWD reports from Oregon and Washington show that the most consistently reported reasons people give when requesting DWD are existential, the top reason being loss of autonomy (85%), not about physical suffering or psychiatric symptomatology (see e.g., https://www.doh.wa.gov/Portals/1/Documents/Pubs/422-109-DeathWithDignityAct2018.pdf). There is some anecdotal evidence regarding ketamine, a legal psychedelic sometimes used with terminally ill patients, that “whereas some…have postponed their option for MAID [medical aid in dying], others have embraced it” https://www.medscape.com/viewarticle/924261.  Whether and how psilocybin therapy might affect the desire for DWD by either increasing it or decreasing it would be interesting to study.

Studies show that psilocybin therapy is effective in relieving emotional and existential distress at the end of life for 65-85% of terminally ill people in clinical trials, when it’s administered properly. There are no lasting negative effects and many significant and enduring positive benefits. These findings fit in with the goals of palliative care, which “Integrates the psychological and spiritual aspects of patient care; enhance[s] quality of life…” https://www.who.int/cancer/palliative/definition/en/ The limitation is that it not be misused – protocols need to be followed that include screening; a reputable drug at the right dosage; a safe place for the experience; the presence of trained guides; and preparation, administration, and integration by those guides.

The Heffter Research Institute, which promotes scientific research with psychedelics “in order to contribute to a greater understanding of the mind leading to the improvement of the human condition, and to alleviate suffering” (https://www.heffter.org/#psilocybin), cautions the following:

Psilocybin is a powerful medicine and it is Heffter’s position that the positive effects found in research to date are achieved only when prescribed by a doctor and used in a therapeutic setting. Safety has not been demonstrated for psilocybin when used outside of a structured clinical or laboratory setting and we strongly caution against recreational use of psilocybin because of potential adverse psychological reactions.

It seems very possible that psilocybin therapy will eventually become an accepted palliative care tool by many scientific, palliative care, and hospice communities. Organizations supporting medical aid in dying need to consider at least two positions regarding the possible support and legalization of psilocybin therapy. One position is that psilocybin therapy belongs in the palliative/hospice care domain and lies outside the scope of organizations that steward medical aid in dying, specifically DWD laws. Another position is to view it as one of the choices terminally ill people should have, which include how to die, as well as ways to ease suffering related to dying (Tucker, 2020).

EOLWA has adopted the second position outlined above. On September 18, 2020, the Board of Directors approved a policy supporting psilocybin-assisted psychotherapy as a legal option, as a part of palliative care for terminally ill patients.

*The Right to Try Act is a law that allows “patients who have tried all approved treatment options and who are unable to participate in a clinical trial to access certain unapproved treatments.” There are several stipulations and requirements that need to be met. Currently 41 states including Oregon and Washington have RTT laws (http://righttotry.org/about-right-to-try/). Also see Tucker (2020).

Dyck, E. (2019). Psychedelics and dying care: A historical look at the relationship between psychedelics and palliative care. Journal of Psychoactive Drugs 51 (2), 102-107.

Pollan, M. (2018). How to Change Your Mind: What the new science of psychedelics teaches us about consciousness, dying, addiction, depression, and transcendence. (Penguin Press, N.Y.)