Her Legacy is my Learning 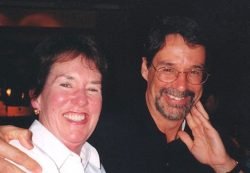 By Bob Free/Board of Directors, President

My older, smart, vibrant sister Janice was always a role model for me. She was the first in our family to attend college, and I followed her to UC Berkeley for my degree. She was a confirmed liberal, and she paved the way for me to follow in her footsteps. In 2016, Janice was formally diagnosed with Alzheimer’s disease—the diagnosis was heartbreaking.

Through my sister’s journey, my family and I had a close-up view into the unyielding anguish of the disease. Watching her become a different person and slowly relinquishing her quality of life, we felt helpless. She would not have wanted to live this way. The Death with Dignity law which we knew provided relief for hundreds–victims of cancer, heart attacks, and other terminal illnesses–could not help Janice. A victim of dementia or Alzheimer’s is not considered terminal, and in the late stage of the disease, the person no longer has the cognitive ability required to take advantage of the law. Therefore, most are forced to live out a difficult and lengthy decline.

This reality prompted much reflection as to what I could do to help Janice die with dignity and later myself if this was my own affliction. I began exploring and considering legal choices to pursue a dignified death if I or other loved ones were confronted with serious dementia—choices that would enable us to control how and when our life would end and avoid unnecessary suffering.

If diagnosed in the early stages of the disease, Janice could have chosen to Voluntarily Stop Eating and Drinking (VSED).  This option is available to individuals who still have sufficient cognitive ability to choose between life and death, and enough fortitude to see the VSED process through.

There is no requirement for a prognosis of six months or less to live, and with hospice and palliative support, it can be a natural and peaceful way to die without suffering. The stories that have been shared by families of dementia patients who have made this choice are inspiring.

Unfortunately, Janice was not given the Alzheimer’s diagnosis until fairly late in her illness. Her neurologist said after my sister’s death that it was likely that she had Alzheimer’s when he first examined her in 2014, and he gave her medication to treat Alzheimer’s, but he told the family the diagnosis was “mild cognitive impairment,” probably to protect us. It is important to get a truthful diagnosis early on, even if the truth is painful, so that important decisions can be made with full knowledge.

With VSED not an option for late-stage Alzheimer’s, I explored what other choices people would have with advanced dementia. I learned that almost all patients living with dementia eventually reach an unresponsive stage when nourishment becomes unwanted and unimportant to them. However, many caretakers believe they have an absolute duty to provide nourishment, frequently cajoling people to eat and drink beyond the time a person is interested in doing so. People in a virtually comatose state can be kept alive this way for years, but this does not have to happen. Forced-feeding is tantamount to an assault on the body, and people living with dementia have the right to decline food and liquids. Learning this, I encouraged my niece, Janelle, who lived close by to her mother, to have a serious talk with the administrators at Janice’s memory facility.

Through her outreach to the administrators of Janice’s care, Janelle discovered unwanted nourishment was indeed the case. Janice’s appetite had diminished. Instead of allowing her to naturally reduce her food and water intake, the staff was repeatedly offering her food and patiently attempting to spoon-feed her when she could no longer feed herself. Following Janice’s Advance Directives, Health Care Power of Attorney, and POLST forms giving her decision-making power, Janelle instructed them not to spoon-feed her unless it was clear she wanted to eat. Janelle also instructed them to not treat certain illnesses if they did not cause pain, as was documented in her advance directive. With the help of hospice, she lived another five months; many months shorter than she might have lived in a vegetative state had unwanted nourishment continued.

We were fortunate that the memory facility and the hospice caretakers listened to Janelle and respected what she told them her mother wanted. However, I learned that many facilities are not always as cooperative, and instructions needed to be carefully formalized in writing. To allow for this, EOLWA Board members, Robb Miller, Terry Barnett, and I drafted in October 2017 a document which expresses a person’s decision about when to be offered food and fluids during late-stage dementia. It is called “Instructions for Oral Feeding and Drinking.” It is similar to an Advance Directive. Our document is the first of its kind in the nation, leading other organizations throughout the U.S. to follow and create similar dementia directives. These documents allow for a surrogate health care decision maker to ensure caregivers honor a person’s wishes-allowing them to naturally follow the body’s desire to reduce nourishment.

VSED and The Instructions for Oral Feeding and Drinking are legal and certainly morally acceptable ways of helping people die with dignity, if Alzheimer’s or other serious dementia strikes. Both can provide solace to people who contract these terrible diseases. My sister’s legacy is now my learning; learning which End of Life Washington shares broadly to let people know that death with dignity is possible even in these tragic circumstances.

Resources from End of Life Washington:

Dementia Directives and Instructions for Oral Feeding and Drinking:  www.endoflifewa.org/dementia