Every day became a countdown to the end.

In mid-2017, 85-year-old Richard Levy started experiencing pain in his chest.  Diagnosed with lung cancer, Richard underwent surgery to remove part of his lung that fall, but it was a losing battle.  Imaging showed that the cancer was spreading fast – it was already wrapped around his spine causing tremendous pain. The doctors believed that Richard had less than 6 months to live and he was referred to in-home hospice care. However, neither the skilled nurses who attended to him nor the medication he was put on could ease his pain.

In October, after consulting with his wife Midge, son Joe, and his doctor, Richard opted to use Washington Death with Dignity law to end his life as soon as possible in a peaceful and dignified matter.  However, the law required him to undergo a 15-day waiting period before taking the next step. What ensued was anything but peaceful or dignified. While Richard stayed home as he wished, Midge and Joe watched him try to fight agonizing pain with the strongest levels of opioids the doctors were able to prescribe. He struggled to move, eat, sleep, shower, or even have a basic conversation. Every day felt longer and became a countdown to the end.

“Telling an 85-year-old man with terminal cancer that he must endure a waiting period was infantilizing. There was no answer to his daily, sometimes hourly question: why?” – Midge Levy

Finally, at 11am, Friday November 10th, 2017, the family gathered at home, said their final goodbyes, and Richard took the medicine as prescribed. He fell asleep within two minutes and died peacefully 20 minutes later. Midge and Joe only wish he had been spared the pain of the waiting period before embarking on his final journey.

To Joe, it was clear that 3 days would have been more than adequate for his mother and him to say their final goodbyes and allow Richard to end his life in a dignified manner as the law was intended to do. The additional 12 days of waiting required by the law did nothing other than increase Richard’s suffering and delay the process.

In February 2021, Joe Levy stood in front of Senator Annette Cleveland and others on the State of Washington Senate Committee on Health and Long-Term Care, opening his testimony with these words “I stand here before you today hoping we can spare others the suffering I watched my father have to endure with his last ounce of energy.”  Despite Joe’s account of his first-hand experience and the support of multiple senators, the bill did not pass.

End of Life Washington continues to campaign for the bill’s passage with the following provisions: 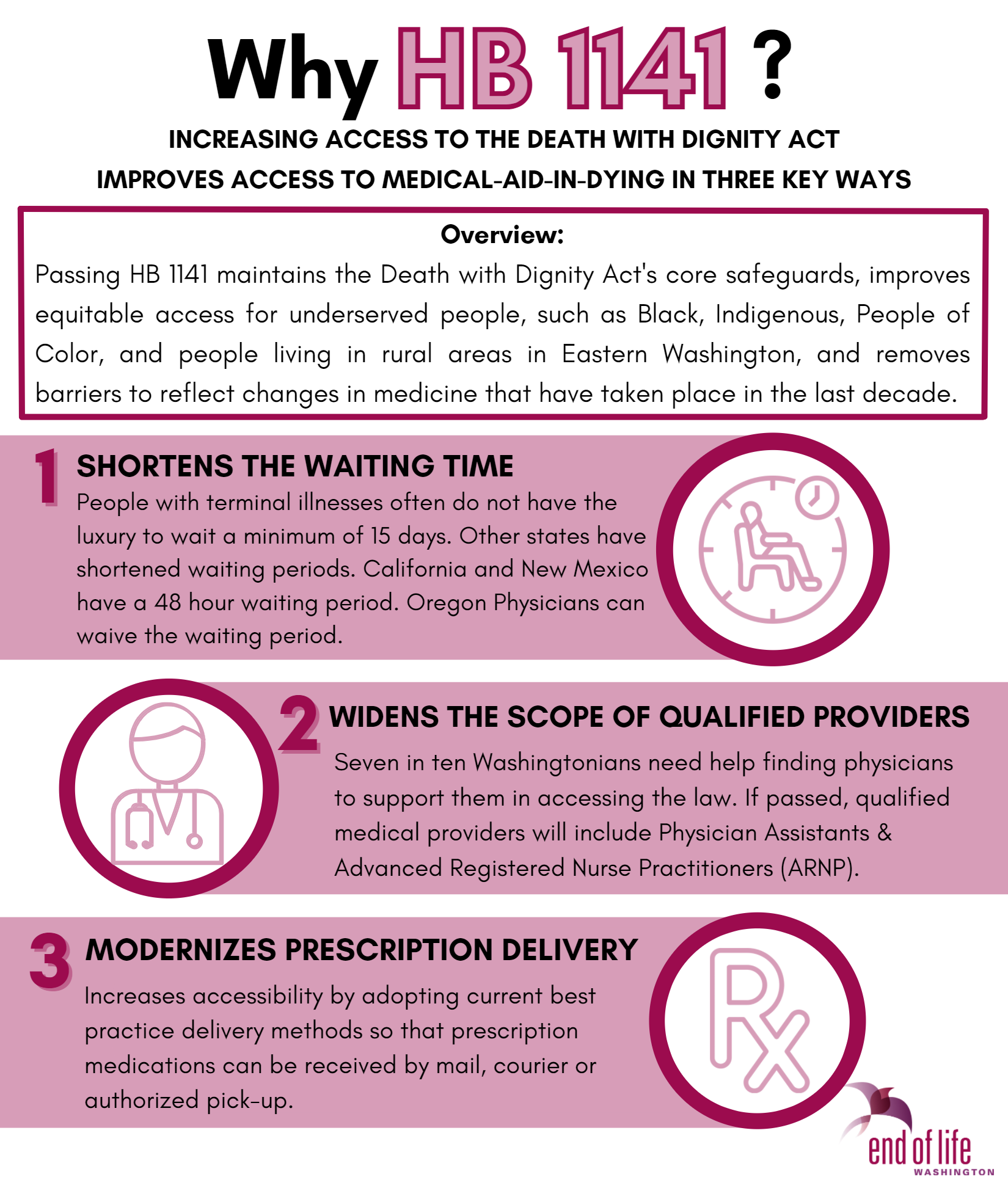 While it is too late for Richard, Midge and Joe continue to hope for the passage of the bill and the comfort it will bring to other terminally ill patients.  To them, this will be Richard Levy’s true legacy.

End of Life Washington is the only organization in the state that provides the education, support, and advocacy necessary to help Washington residents exercise their choice to die with dignity and autonomy. More than ever we need to protect access to, awareness of, and support for a full range of end-of-life choices. Together, and with your financial support, we will have the ability to grow and adapt to support others like Richard to die as they choose.

Help us protect and support  the most important decisions of our life!